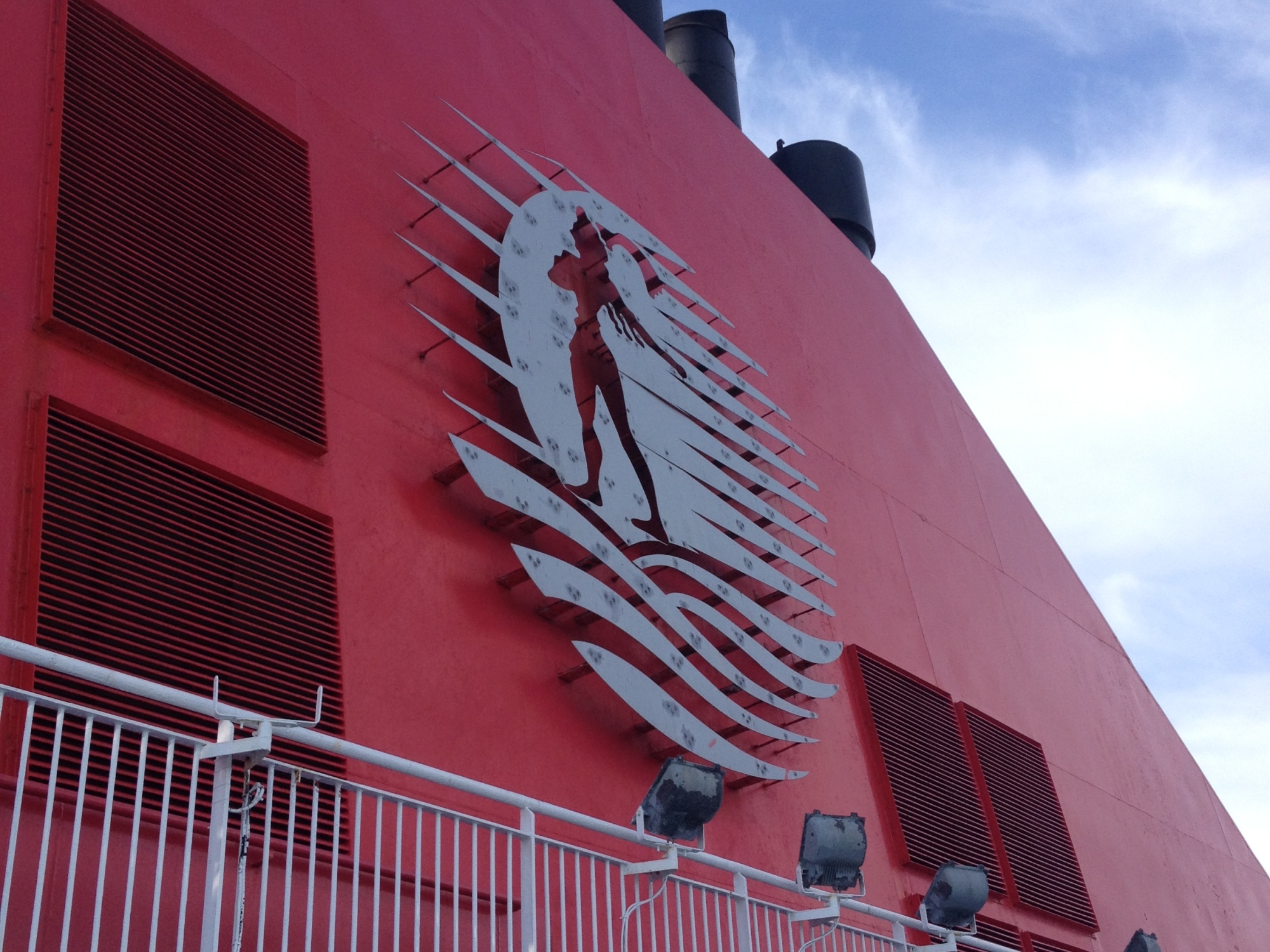 The ship has been renamed M/V Cruise Smeralda and now sails from Savona, Italy on mondays. Arrival in Tanger, Morocco on wednesdays. Fares have dropped further: the one-way ticket including an outboard cabin is avaialable for as little as 135 Euros now.

The ferry now operates in and out of Sicily. I was so happy to spot her destinctive features from a church tower in Palermo!

Booking
I could not book the trip on Grimaldi’s website directly, as it continually reported back an alleged problem with my credit card’s online purchase protection, so I had to go via directferries.com. No big deal, however it added an entirely unnecessary 10€ booking fee to my bill. All in all I paid 215€ for the entire Livorno–Barcelona–Tanger MED trip in an outboard double cabin (single occupancy) without meals. The mere deck passage would have been an incredibly low 60€ and the Pullman seat area did not look too bad either (a bit like the economy class cabin in a Boeing 777 aircraft). So if you don’t mind sharing 60h of marine travel with strangers: This is your cheaper than cheap option to get to North Africa!
I did also check the prices to take a car and found them to be quite steep. NB, that all prices mentioned here are low season and will rise considerably in summer.

Getting to Livorno.
Livorno is well-connected on the Trenitalia Network with regional trains going there from Firenze [Florence] via Pisa every half hour or so. My friend Edi highly recommends the coffee shop in the terminal.
Flying into Pisa will probably give you some good deals, as Ryanair and Easy jet go there frequently. Sometimes there are also good deals to Firenze from München and Frankfurt on Lufthansa (flown by Air Dolomiti which is much more fun than mainline Lufthansa)

Ports, Check-In, Boarding and Disembarking
If you join the ship in Livorno without having your own wheels, here are a few hints I got from a friendly Grimaldi employee via E-Mail. I even met him at check-in at Livorno and we had a nice chat. In general, I have to say that every Grimaldi staff I encountered was responsive and friendly).
„Please find a map and all the requested information at this link:
http://www.grimaldi-lines.com/en/accesso-ai-porti.html?id=7&desc=LIVORNO
the exact address of the ticket office is: VIA LEONARDO DA VINCI N° 41/43 LIVORNO
I counsel you to get a taxi ( no shuttle bus service on site ) and come to the ticket office to
get your boarding card, so then it will bring you to the ship in Darsena Toscana Ovest ( viale
Mogadiscio )“

Good advice indeed. Unless you are very strapped for cash and/or are travelling very light, you really should invest in that taxi! While there are buses that take you somewhat close to the check-in at the Ticket Office (from Livorno Centrale train station as well as a regional service from Pisa), I would not recommend walking from there to the ship as this requires crisscrossing a working harbour with a lot of confusing paths, ditches, closed gates and highway overpasses. It looks simple on google maps but I really would not like doing that hike on a sweltering Tuscan afternoon! Taxis are easily available outside Livorno Centrale train station and cost about 25€ including the waiting time.

If you want to stock up on provisions, which is a good idea given the rather high prices and limited choice on board (see below), there is a Pam Superstore (P.zza Saragat, 10/2) en route between the train station and the Check-in Terminal. However, if you have the time and means of transport, I would suggest to shop at Esselunga in Pisa (as far as I am concerned the best value Italian supermarket chain).

Once you have been dropped off at the ferry dock, you may use the “waiting area” until you are called to board. This really is the EU’s back door and you should not expect to more than a few concrete blocks to sit on, a rusty container with a few creaky chairs and a coffee vending machine that bears an unnerving resemblance with the infamous Nutri-Matic Drink Synthesizer from Douglas Adams‘ Hitchhicker’s Guide to the Galaxy. You will be briefly questioned by an Italian customs officer before boarding and your passport is checked by Italian Border Police.

Once aboard the Ikarus Palace you can proceed to the Reception on Deck 6 and receive your cabin’s key card and you’re all set. On the next morning you will have to pre-clear Moroccan immigration on board. They set up a facility in the ship’s disco club for this – funny to have your passport stamped in a DJ booth.

The ship arrives in the new Tangier MED port, which is about 50 Km out-of-town (!). Foot passengers are taken to the terminal by bus to clear customs. I continued my trip with the cross-strait ferry to Algeciras (offices on the 1st floor – beware of the „helpful“ middle-aged men there) right away so I can’t share anything about onward travelling.
(BTW, the phenomenon of the helpful middle-aged man is the main reason I did not spend more time in Morocco.)

The Ship „Ikarus Palace“
The ship is operated by Greek Minoan Lines which now are a part of the Italian Grimaldi Group. It used to be kind of a Queen of the Adriatic and was very popular with Dutch and German tourists in the 1990ies. Built in 1998 in the Fossen Yards in Norway it is 200 M in length, 26 M in width with a draft of 6.8 M. It can accommodate more than 1,500 passengers as well as up to 110 vehicles. Its cruising speed is 27 knots (about 50 KPH). The Ikarus Palace was one of the early cruise ferries with improved passenger facilities such as swimming pools, shopping arcades, casinos and entertainment bars operating high yield leisure routes. Nowadays this segment within the Grimaldi group has been taken over by the two huge cruise ferries „Roma“ and „Barcelona“ and the „Ikarus Palace“ has been reassigned to the less prestigious western Mediterranean routes. It shows a bit. The whole ship seems to be well maintained but was never refurbished. Every spot in the public areas looks aging.

Onboard Experience
The interior of my cabin seemed to be every bit the original 1990ies outfit. Again spotless down to the last cracked tile in the shower but worn and overused. The cabin was surprisingly spacious (much larger than on Baltic or Tirrenian ferries). During the 60h trip no steward ever attended to the cabin – not even to clear out trash or replenish toilet paper.

Dining was a somewhat frustrating experience. Given that this is a Greek ship cruising between Italy, Spain and Morocco – countries with some of the world’s most amazing cuisines – one would expect the restaurants would do a little better than that. Honestly, every Italian truck-stop serves a better fare! While the food itself was probably not too bad after it left the kitchen, it sat around for ages and was served soggy (or dry), overcooked and lukewarm. I had the worst lasagne of my entire life on board and I have seen my share of  economy class airline lasagnes. You couldn’t even get proper olive oil and vinegar for your salad, instead you were offered a plastic sachet full of a highly suspicious “Oil and White Wine Type Vinegar Mix”. Once again, this ship sailed from Italy!

Apart from the main meals which were served on nice Minoan branded china, every food and drink was served in/on plastic or cardboard. Even the white wine in the cafeteria was poured from a tetra pack container into a wobbly plastic cup. I did mention, that this ship sailed from bloodyy Italy?!

There is also a more formal restaurant which I did not try. Reviews on the web suggest that I didn’t miss much…

Breakfast was quite good with very nice pastries, fresh fruit, cold cuts of cheese and yoghurt available. Yet, you could not get any orange juice – not for love and money. The saddest part of breakfast, however, was the “café latte”: coffee from a large pump-can with lots of UHT milk. Reminded me sadly of 1980ies style „cappuccino“ in rural German inns (filtered coffee topped with spray cream from a can).

As I mentioned, I travelled in low season so the load was light. About 150 passengers, 200 tops. Most fellow travellers were truck drivers or small-scale merchants. The only other tourist included a few Italian silver ager couples, two hippies with their child and a group of Italian bikers in their 50ies. (They were dressed in butch khaki, yet the way they fiddled with their satellite phone and compass one afternoon on the wintergarden-deck made me see scary newspaper headline in my head…Remains of Italian Bikers Finally Found Way off Their Planned Route Through the West Saharan Dessert

A number of facilities remained closed during parts of the journey; the children’s play area, internet corner and pool altogether probably due the low season.

Mobile phone and data coverage was limited: briefly during the first night on French networks from Corsica, about 1 ½ hours in/out of Barcelona on Spanish carriers, and patchy along the Spanish coast. There was no onboard WiFi available.

The stopover in Barcelona takes about 4h. I did not check, if “shore leave“ would have been possible, as it was already late.

All in all, this was a comfortable and comparatively cheap way to get from Italy to Morocco. I was especially impressed by he relaxed friendliness of every member of staff from check-in to disembarkement. Too bad that the presentation of food and drinks and the general state of the ship somewhat lacked a daisy – even by ferryboat standards.

This site uses Akismet to reduce spam. Learn how your comment data is processed.