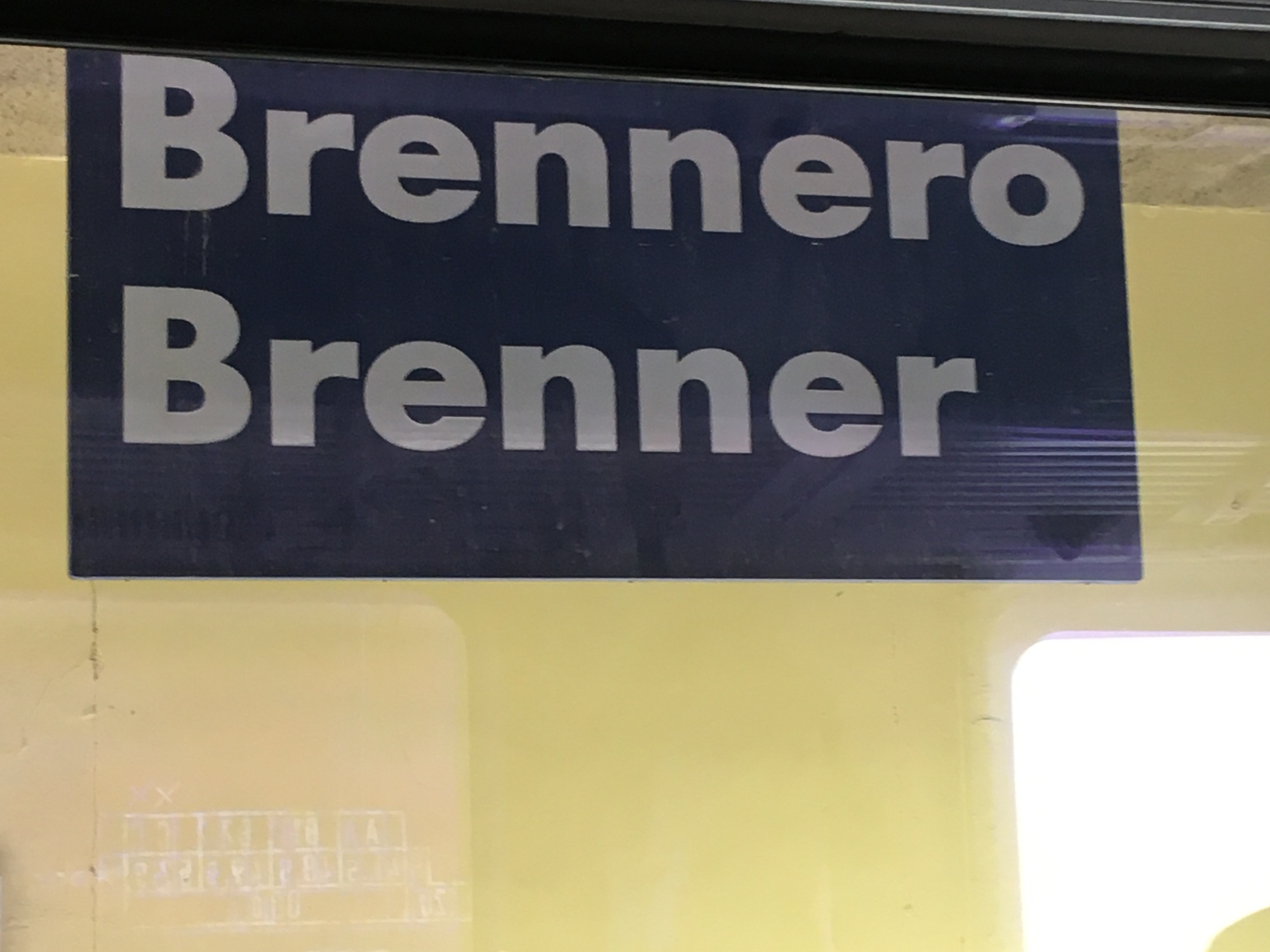 Originally this should have been a short hop on a plane but for various reasons we had to book at the very last minute and couldn’t fly at all. To travel at a leisurely pace we broke the trip from Leipzig, Germany to Rome, Italy in two and booked an overnight stay in Innsbruck the capitol of Tyrol in Austria.

Booking this trip last-minute proved to be a little difficult and pricey too. For the first leg Deutsche Bahn, for once, made it relatively easy as the Leipzig–Innsbruck section was uncomplicated to book as a Deutsche Bahn Flexpreis Europa at 128.15 € per person (factoring in a BahnCard 25 discount) plus a 4.00 € reservation fee.

The second leg became a little more nerve-racking as the evening before our intended travel day drew on and I got thrown out of Austria’s ÖBB booking platform twice and both times at a very late point in the booking process, with my credit card already pre-authorizes for the transaction. Annoying, even if I wasn’t charged in the end as it could have interfered with my spending limit.

In the end, I booked through Deutsche Bahn International, which more often than not crashes too, but on that night kindly produced another DB Flexpreis Europa valid on the Innsbruck–Bologna leg (as the operating EuroCity was on ÖBB metal yet a cooperation with DB) and a ticket for Trenitalia’s Frecciarossa high speed train from Bologna to Rome. The fare from Innsbruck to Bologna was 55.00 € plus 4.00 € reservation.

All fares so far are in 2nd class. For the last leg to Rome I chose premium economy seats at 58.90 € per Person. All tickets and reservations added up to 250.50 €. Including the double room in the Ibis hotel next to Innsbruck’s main station at 60 € per Person, the whole trip came in at 310.50 Euros – roughly the same amount that a flight with one checked bag on a low-cost airline would have cost.

The first leg to Rome was on a Deutsche Bahn ICE train to Munich and uneventful, the only nuisance being that trains on this route encounter a slow patch between Nuremberg and Ingolstadt which has been around fpr quite a while, but isn’t factored into the timetables, so our connection time in Munich central station melted away. In the end we made it but had to cancel our traditional stop for pretzels and spezi (a mix of orange lemonade and cola, which is very popular in southern Germany).

Every sleeper on the route from Munich to Innsbruck takes you nearer the alps and once you cross into Austria in Kufstein you’ll feel a distinct change in scenery, as the mountains draw closer to the tracks and get steep and rocky.

By the time we reached Innsbruck with a negligible delay night had fallen and we made our way straight to the Ibis Hotel, which is basically located in the station building. It was shortly before 10 pm when we arrived so I had hoped to get a little snack and some drinks at the station but every oulet was closed already, so we ended our first day on a frugal note with a drink from the hotel bar and the remainders of our packed lunches. We slept comforted by the knowledge that our next ride was going to depart just a few hundred meter from our beds and that the culinary situation was likely to improve south of the border.

Loaded with pretzel rolls and Tyrolian salami from the station bakery we strolled back to the platforms that were basking in glorious sunshine on this spring morning. Innsbruck is fascinatingly close to the mountains and the vistas from the station are stunning.

Security staff on the platform did a quick check of our COVID-status making sure that we had the Italian Green Pass installed. As the train pulled in, we realized that those basic, metro transit-style trains not only operate between Munich and Innsbruck, but also all the way to Italy.

The EuroCity seems to be a much-hated train category with operators dumping their oldest material on those relations. Seats on this train were worn and tight, the aircon shaky, and the restrooms dated. There was no WiFi and only the smallest of tray tables but there were a few power outlets to charge a phone.

A dining car is also missing, just a bar cart was selling packed snacks, drinks and coffee, which – credit where credit is due – was excellent coming from a batterypack-powered espresso machine.
The train starts climbing into the Tyrolean mountains almost immediately after leaving the station and heads for the Brenner-pass. Both the transalpine Brennerautobahn and the railroad wind upwards into the small, elongated valley. The trains stays close to the mountainside for quite a while, so sitting on the right hand side of the train (going south) offers more views.

As the engines slowly haul the trains up to the top of the pass, passengers can watch the mountain scenery getting more rugged and barren. When the train stops at Brenner, take a minute to realise that you are about to cross not only the border to South Tyrol and this Italy (don’t get into politics there) but also on the divide between northern and southern Europe.

On this particular day the balmy weather continued during the descent and watching the Etsch-valley gradually open up into the Trentino was a relaxing way to spend a morning on the tracks. The train wasn’t going too fast on the southern side of the alps either, which helped sightseeing but also meant that we kept accumulating little delays at each station, so we were getting a little nervous about our connection in Bologna.

The scenery changes into the flatlands of the river Po as the trains makes its’ way via Verona towards Bologna, which we reached about 20 minutes late and missed our connection to Rome as we feared. Not a big problem as it turned out when the helpful conductor on board directed us to a help point in the station where two super-friendly agents quickly changed our tickets, issued new seat reservations and sent us on our merry way to the next Frecciarossa high speed train, which departed just half an hour later.

Frecciarossa is one of Italians high speed lines operated by state owned Trenitalia with NTV as its’ privately run counterpart. These trains by AbsaldoBreda/Bombardier serve two major lines crossing Italy north/south and east/west at speeds up to 300 KP/H. They feature four travel classes with standard, premium, business and first class. an upgrade to premium during booking was just a few euros so I didn’t ponder that for long. The difference in comfort is not huge though: leather seats and free coffee and cookies are the main differentiators.

The train was full but as every ticket includes a reservation on Italian high speed services this didn’t matter too much.

Beyond Bologna the high speed rails crosses the Apennine Mountains, Italia’s “other” big mountain range, through al lot of tunnels into Tuscany. Views become more wide and epic around Arezzo which can be seen from afar nestling on its’ hilltops.

The remainder of our journey through Umbria passed quickly and soon the “red arrow” slowed down to enter Roma Termini station. Travel time from Innsbruck was a little over 8 HRS including the delay. The journey didn’t feel too exhausting though and we arrived relaxed and ready for some evening sightseeing.

Are Daytime Eurocities an Alternative to Flights?

Short answer: not yet. Before wider parts of the travelling public will consider taking the train instead of flying, two major issues need to addressed in my opinion:

First of all, European high speed lines should be better integrated. This particular journey involved bullet trains between Leipzig and Munich as well as Bologna and Rome but there was a large gap in between on ageing tracks and rolling stock that is decades old. This is more than just a question of comfort as long travelling times will push people outside the timeframe they are be willing to invest in a more climate-friendly journey. Travellers consider six hours acceptable according to a Greenpeace study – I would say eight maybe for leisure travel. The combined net travel time of this trip, however, was about 13 ½ HRS. Night trains with comfortable sleeper options could be a solution here but at least between southern Germany and Italy there are far too few seats on the market. We had tried to book a ticket on ÖBB’s NightJet from Munich to Rome in late February but every sleeper and couchette had already been sold out.

The second issue that needs to be improved is ticketing. Getting our trip organized took about two hours on the computer which in the end produced three different tickets. That is a lot of time and hazzle considering that we were just travelling between two core EU-states and didn’t need any ferry crossings or other complicated transfers. Last but by far not least is the price. This trip totalled at 250.50 €. A plane ticket from Berlin to Rome in the same week would have been 86 €. Unless this changes, few people will chose to cross the alps on the rails, which is too bad as it is an epic experience.