Lufthansa long-term, efforts to become europe’s first airline with a five-star Skytrax rating have finaly paid of in early December 2017 when the German flag carrier received the long-awaited award. The airline celebrated its succes with stylish ads funny videos an a downright embarassing twitter campaign featuring a picture of the award certificate in an Airbus seat being served tomato juice.

The announcement has been met with a surprising amount of criticism, focusing on the intransparency of Skytrax’s rating system, and the kick back Business they generate through licensing fees and charges for „consulting“ which the company allegedly asks from participating airlines. Lufthansa’s fifth star came under special scrutiny as it seems to be based, at least to a certain extent, on a future business class product that will only be introduced in 2020.

I was surprised to read many negative comments in aviation an travel forums, denying Lufthansa their new status, as my recent experiences witrh our national airline have been positive throughout, sometimes even outstanding. So this is a review of my latest Lufthansa flights to Boston and back (LEJ-MUC-BOS//BOS-FRA-LEJ) which I took with my family in economy class this summer. So let’s check out if Lufthansa is a five-star Airline in the eyes of the occasional, leisure orientated economy Flyer.

Lufthansas website is pretty straightforward and I find their price/calendar chart really user-friendly. The booking tool goes easy on the upselling and booking takes less that ten minutes altogether. Adding the APIS data later was a little more challenging while booking special meals and seat reservatiosn were quite easy.
4 1/2*

Online check in returned one „funny“ boarding pass for noting a non-existing TSA pre membership for one of us. The hotline tried hard but could not sort it out. In the end it did not matter, but was a little unsettling given the recently tightened U.S. border inspections.

Bag drop in Leipzig was quick as was security and boarding. The terminal is a little past its prime, has next to no shipping outlets and just one ridiculously overpriced café with rude staff but that is hardly Lufthansa’s fault

The CRJ looked fresh and clean and seating was not too cramped. 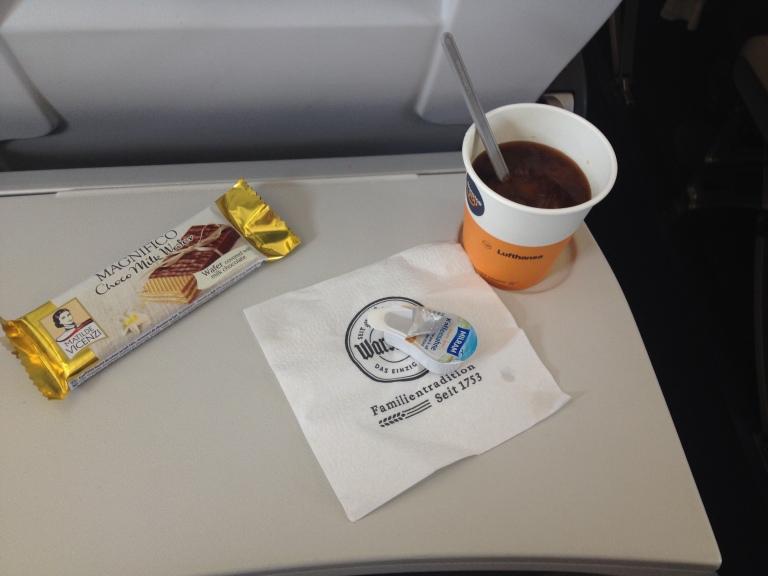 Flight attendants handed out chocolate bars upon boarding and came around with rounds of hot and cold drinks inflight – great service on a  40 mins. flight!
5*

LH operates its own terminal at Munich and changing planes there is a real pleasure. The terminal is well-appointed with shops, cafés and restaurants, easy to navigate and offers lots of comfortable seating with panoramic airfield views. When boarding was called, a gate agent found us in the queue and invited us to board first with our little daughter.
5*

The A 350 had just entered LH’s fleet a couple of weeks ago and still smelled like a new car. Needles to say that everything in the cabin was sparkling clean. The seats were thin but comfortable with a seat pitch of 31 inches. The blankets and pillows waiting at the seat looked nice and comfortable and were of solid quality. The headsets on the other hand were a little on the shabby side with wobbly plugs.

The IFE screens on the A 350 are huge and highly responsive. The system offers the usual selection of movies and TV shows as well as games, outside cameras and a comprehensive airshow.

Watching the onboard cameras was a lot of fun and I particularly enjoyed the tailcam view. The media library was also well-stocked with childrens‘ programmes, but could have used one or two more recent hollywood blockbusters in my opinion.

Flying on this super-modern Airbus turned ot to be a pleasant experience. Its engines are quiet and the large windows give the cabin an airy feel.

Shortly after take-off the crew started a first drink service followed by hot towels. The bar cart has the usual assortment of juices and soft drinks, beer, wine and a nice selection of international spirits. Regrettably LH only offers Warsteiner beer in economy which is one of Germany’s most boring mainstream beers. Their white wine on the other hand has a nice, fruity bouquet and is quite drinkable.

Choices for lunch were the usual chicken or pasta with a special children’s meal (also pasta). All meals were nicely presented and tasted quite good.

The chicken with spinach and roast potatoes was especially nice. The meals came on Lufthansa’s redesigned flatware which now has a larger salad bowl, new trays and a new and larger coffee cup which is served from the trolley after the meal together with brandy or liqueur.

Drinks were available in the galley throughout the flight and the FAs also did rounds with water and juice.

Before landing hot savouries in a box were served with another round of drinks. They looked strange but tasted surprisingly good.

The crew on this particular flight was stellar. They took time to chat with every passenger and were attentive and helpful. The FA serving our row even remembered the drinks preferences of all three of us throughout the entire flight.

Boston-Logan is a good place to enter the US with reasonable waiting times and we cleared immigration and customs on about an hour.

The waiting time at the economy class bag-drop in Boston was less that ten minutes; clearing security took a bit longer.

International terminals in the US often are small and a little neglected so the gate area in Boston did OK by comparison.

The service on this short transatlantic flight started early and proceeded quickly – leaving enogh sleeping time. Main meals on this leg were absolutely awful. The pasta was soggy, the vegetables hard and the sauce tasted chemically and weird. Salad and dessert were again delicious.

The light breakfast before landing was way better and included a nice fresh fruit salad.

The cabin crew were again outstanding: well-organised, friendly and hospitable.

All in all a good flight, yet not excellent as the food was partly inedible so just
4*

Frankfurt has a bad reputation for transfers yet we were unaffected on this trip, probably because our connection time of two hours gave us plenty of contingency. We found our gate alright and passed the rest of the waiting tine watching the apron (and fighting our jet lag).
4 1/2*

FRA – LEJ ist a very short hop (approx. 35 Minutes). The FAs tried to deliver the same service as on the Munich leg but had to stop serving drinks two rows before our’s due to landing preparations. No big deal, but I could have used a cup of coffee at that time!
3*

All things considered these were two very pleasant journeys with two aspects of Lufthansa in economy beeeing definitively stellar: their hard product (cabin interior, seats, IFE, blankets, pillows) and their exceptionally well-trained cabin crew. The service experience is solid sprinkled with a few premium service points such as metal cutlery, hot towels, aperitif & digestif service; while others miss: no amenity kits, no menu cards, boxed snacks instead of meal trays for the second service. So maybe the fifth star really is wrapped in advance laurels

Compared to a trip on Singapore Airlines  this journey on Lufthansa was very good, yet not fully on par with the asian five-star carrier. So I have to take the easy way out here by privately and very subjectively awarding Lufthansa 4 and a half stars, hoping, as Skytrax apparently does too, that this will encourage them to constantly improve their product in the next years.

This site uses Akismet to reduce spam. Learn how your comment data is processed.